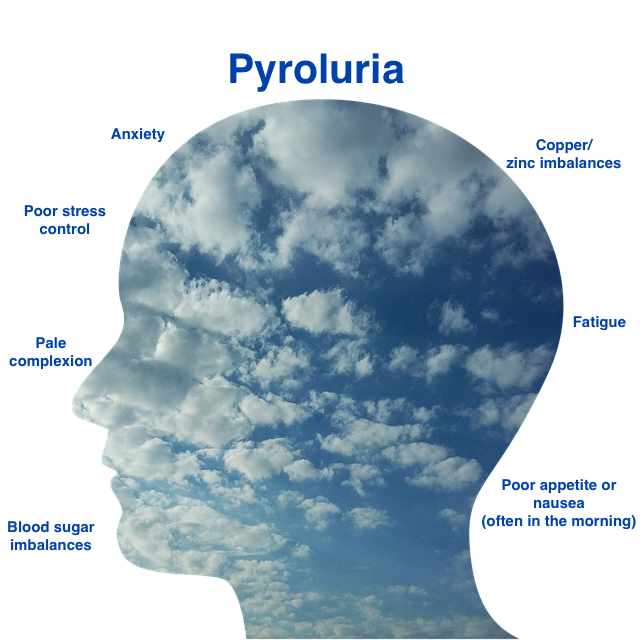 Pyroluria or pyrrole disorder, is a genetic condition in which an individual produces an abnormally large number of pyrroles. Affected individuals may have five to ten times more pyrroles than are usually produced.

Pyroluria can occur at any age but can be brought on by stress.

However, from my research and working with clients who have pyrrole disorder, there appears to be a big link with copper imbalance.

What exactly is Pyroluria?

Pyrroles are synthesized during haemoglobin production in the body. While it is normal for some pyrroles to be produced as a haemoglobin byproduct, certain individuals tend to produce an excess.

Pyroluria is a condition in which pyrroles are overproduced in the liver and bone marrow.

When zinc is deficient, copper can increase and eventually become biounavailbale and toxic. Hence this could be the link between copper toxicity and Pyroluria.

Common symptoms of Pyroluria include:

Testing and treatment for Pyroluria

Pyroluria can be diagnosed by a simple (and relatively inexpensive) urine test that measures kryptopyrroles. A hair mineral test is also useful to check levels of minerals.

Many clients find relief with tailored nutritional plans. Zinc and B6 are key but other nutrients are often used concurrently such as manganese, magnesium, B vitamin complex, biotin, additional vitamin B2 & B3 (in some cases), vitamin C and liver supports.

Some people are able to recover from Pyroluria, with nutritional and stress management practices. Others need lifelong nutrient support, while others will require additional nutritional support only in times of very high stress.

If you would like help in any way to diagnose or treat Pyroluria, please email me at kathryn@routestonutrition.co.uk